Yamaha YDP-S34 Review: What piano should I buy? 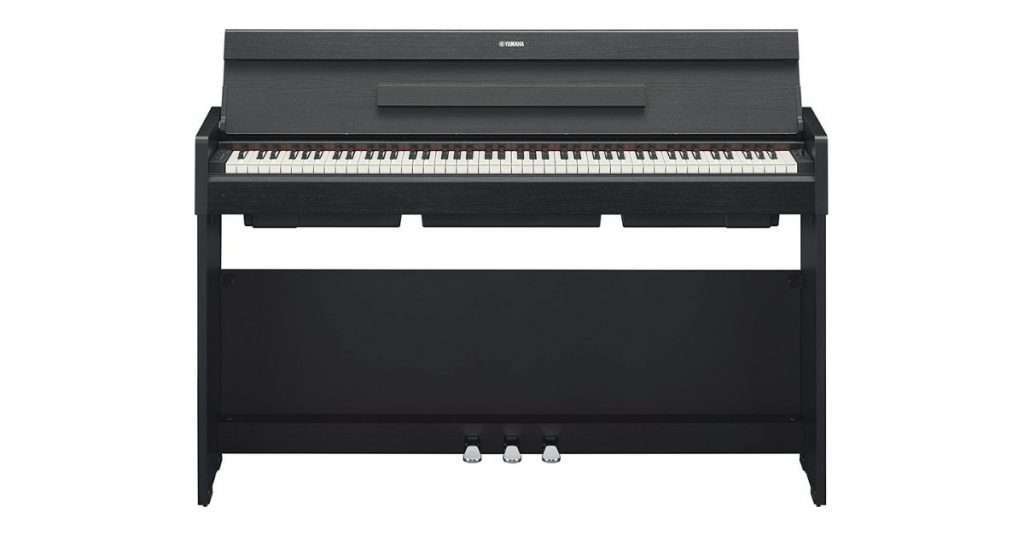 If you’re looking for Yamaha YDP-S34 review, then you’re at the right article. In this article, we’ll discuss a complete review of the Yamaha YDP-S34. Everyone loves digital keyboards that convey the sound of high-quality classic grand pianos. Unfortunately, the biggest problem is getting these sounds at a reasonable price. The Yamaha YDP-S34 is a continuation of Yamaha’s attempt to provide some of the best grand piano sounds in an affordable package. This keyboard features some of the best classic sounds we all love. These sounds are further enhanced with some technical gimmicks to create magical voices.

Another thing we really like about this keyboard is the overall structure. Yamaha aimed not only to provide an excellent keyboard in terms of performance but also to add beauty to the home and studio. The Yamaha YDP-S34 is a sophisticated design with a wonderful aesthetic that you will love from the beginning.

In this review, we’ll take a closer look at what this new addition to the Arius series offers. Here’s what you can expect from this instrument. Let’s start our Yamaha YDP-S34 review article. 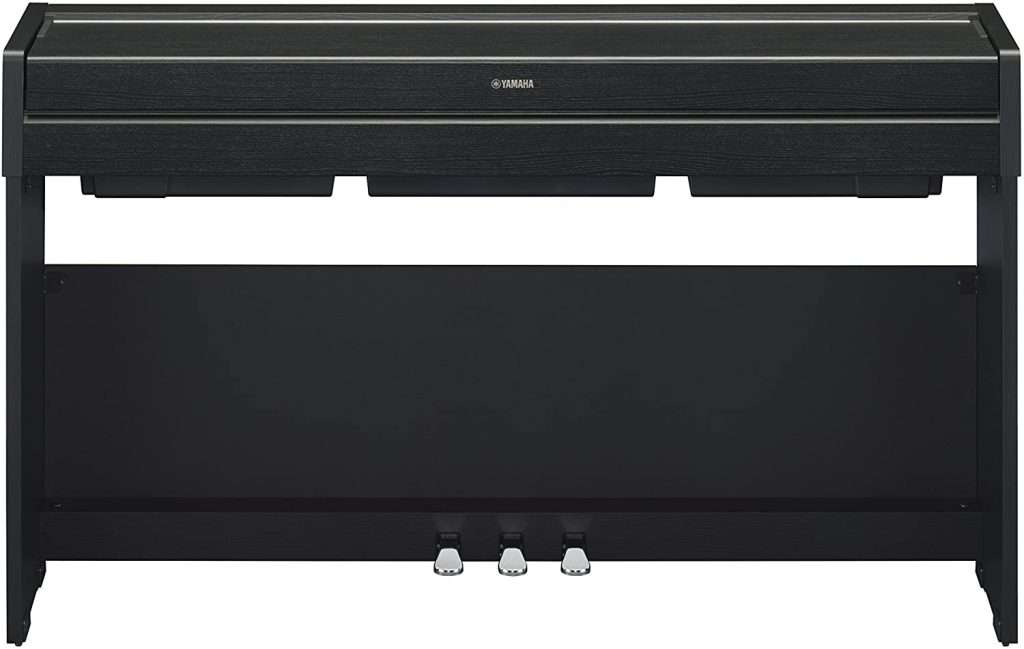 At the YDP-S34, Yamaha showed that digital keyboards do more than just provide basic features such as voice and connectors. They designed this keyboard in a very simple way, but it turned out to be very elegant. There aren’t many details about this keyboard and, most importantly, the other stylish ones that draw your attention. Actual performance. The manufacturer’s logo is also kept inconspicuous. There are only two parts of the keyboard with the Yamaha logo. One is on the lid of the relatively small letters and the other is on the slightly larger left side. All the remaining fonts displayed are finished with black veneer covered with wood grain.

The appearance of the keyboard exudes elegance, and this instrument is available in three different colors. The keyboard looks great in all these colors, but the black walnuts have something unique. Not only does it look elegant, but it also blends more easily into home decor than the other two colors. This is just me, but the color is a very subjective issue, so the other two may be more attractive.

In this Yamaha YDP-S34 review article let’s talk about its quick overview. Whether you’re a beginner or a skilled pianist, Yamaha YDP-S34 attracts everyone with its chic design. This top-class piano offers a high-end CFX sound engine at an affordable price.

In a nutshell, if you’re a beginner and would love to experience the premium acoustic piano feel, you shouldn’t miss out on the Yamaha YDP-S34 digital piano.

How Does It Look?

Yamaha YDP-S34 is a compact, modern, and stylish console-type piano. Unlike many other pianos, the chic appearance and cutting-edge style of the Yamaha YDP-S34 grab everyone’s attention, from beginners to professionals. This slim piano weighs almost 36 kg and has dimensions of 53″ x 11″ x 31″ (W x D x H).

The key cover folding style is pretty similar to an acoustic upright piano. It boasts a slow-closing feature that prevents the cover from directly shutting down on the keyboards. Since the piano has no lifted cabinet, you can expect a flat surface after closing the key cover. The firm side panels and flat top offer a jazzy look and contemporary vibes.

Yamaha YDP-S34 has 88 keys made of premium plastic. Of course, it has no advanced ebony or synthetic ivory weighted keys like Yamaha YDP 184 digital piano or another grand piano, but the Yamaha YDP-S34’s spacious and well-built keys never disappoint you.

The white keys with glossy detailing and the matte ones render a modern acoustic piano look. Furthermore, the red velvet at the end of the keyboard adds a sense of royalty(It often makes you feel like playing a traditional acoustic piano!).

Yamaha YDP-S34 Boasts A Broad Music Rest. So What?

Most professionals struggle to place extensive musical notes on the panel when it comes to music rest. Sometimes, it leaves the users with a bad playability experience. However, here comes the Yamaha YDP-S34 piano with spacious music rest.

So, you can place multiple A4 music sheets. In addition, Yamaha offered page holder features on the music rest, preventing pages from gliding down. Usually, the Yamaha YDP-S34 piano’s music rest lies inside the key cover. So, you should flip it down to rest your music sheet notes.

In a nutshell, Yamaha took ultimate care in providing a great user experience. The best part of Yamaha YDP-S34’s music rest is you don’t even know it exists after closing the key cover.

Does It Fit My Home Style?

Whether you’re a traditional or stylish home decor, Yamaha YDP-S34 perfectly adjusts to your style. As it’s pretty slim, it only needs teeny-tiny space. Even if you place it in your mini living room, you can easily play it.

It generally comes in two color variations- Black Walnut and White Satin. Adding this piano to your living room enhances your home decor, especially if you’ve got a minimalistic design.

What About Sound Quality?

Didn’t you remember the CFX Concert Grand Piano? It’s usually played in World’s popular concerts. This was the piano used by the winner of the International Chopin Competition in 2010. Yamaha YDP-S34 manufacturers recorded the remarkable sounds and programmed them to produce great music. 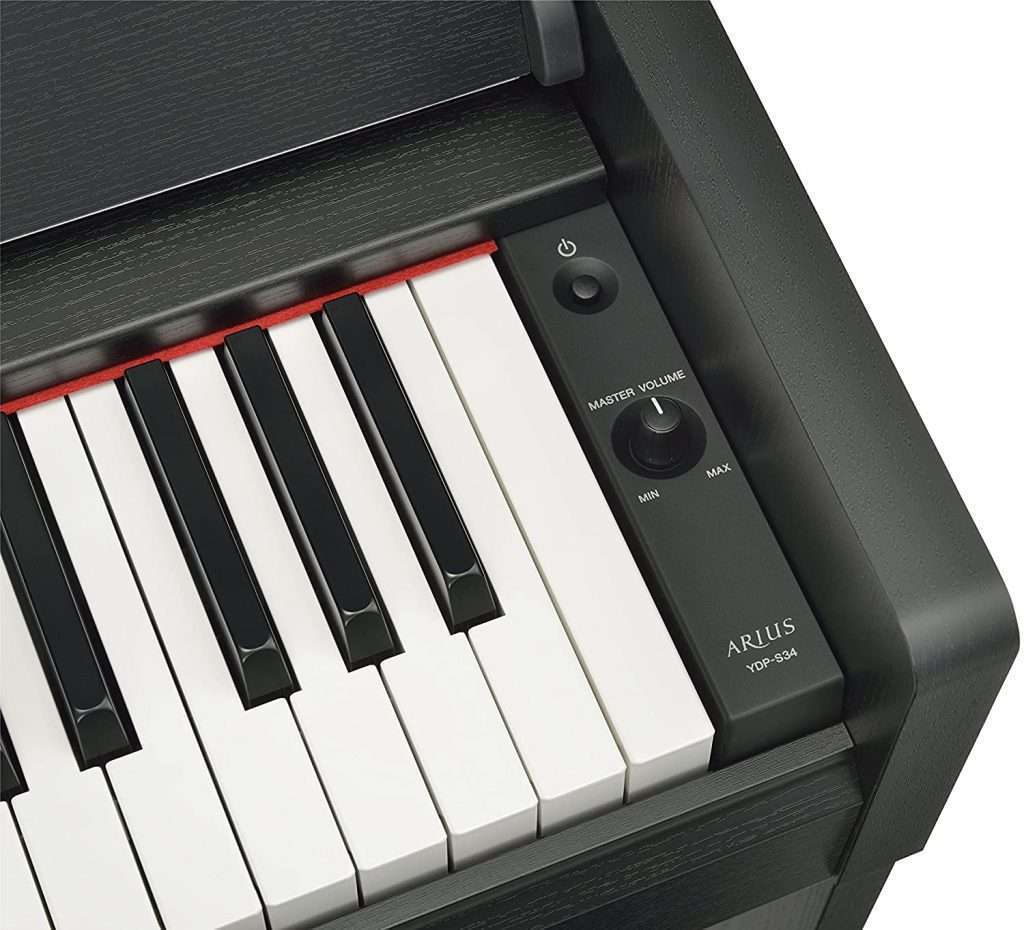 Its CFX sound engine perfectly mimics the grand piano sounds, ensuring a pleasant listening experience. However, one should admit that Yamaha failed to engulf robust built-in speakers. It has a pair of 8-watt speakers.

Although it has a CFX sound engine, the not-so-powerful speakers prevent it from producing remarkable sound quality. The mid-range is good, but the bass and treble sounds are questionable.

The quite awkward thing about sound quality is sometimes the bass and treble notes seem muffled. But there’s also the best thing to consider about Yamaha YDP-S34. And it’s nothing but its softer sound– Users said that Yamaha YDP-S34 produced excellent softer sounds despite its weak built-in speakers.

If you’d like to use the CFX sound engine to the fullest, here’s some good news. Although it interrupts the piano’s sleek design, it’s worth using speakers to produce more refreshing and high-quality sounds with nuances. Leverage external speakers or monitor systems.

What Else Should You Know About The Sound Effects?

The Yamaha YDP-S34 piano has four reverb levels that help you play in multiple-sized rooms. Like many other grand concert pianos, Yamaha YDP-S34 has Acoustic and Stereophonic Optimizers. The acoustic optimizer enhances the overall sound quality and perfectly controls the musical instrument’s resonance.

You perhaps play piano at a low volume level to not disturb others in your room. However, the bass and treble tones don’t work well when you’re working with low volume levels. And here comes the Intelligent Acoustic Control(IAC) that controls the Yamaha YDP-S34 Piano’s EQ to produce a stellar tone irrespective of its volume level.

IAC helps you play ultimate bass and treble voices even at low volume levels. This is one of the best features of the Yamaha YDP-S34 piano for people living in small rooms with their roommates or apartments with small living spaces.

You perhaps love to practice piano using headphones with high privacy. But the problem with it is it incredibly dips the sound quality leaving you with an unpleasant experience. This is why here comes the Stereophonic Optimizer.

Now, you can enjoy the best sound quality. A stereophonic optimizer highly optimizes output sound, giving you a more natural-sounding feel. This optimizer makes you feel as if the sound is directly coming from the digital piano rather than headphones.

In a nutshell, the Yamaha YDP-S34 ensures the ultimate sound experience while using headphones or playing at a low volume. In addition, it has 50 inbuilt songs that help you either practice piano or record new tracks.

In this Yamaha YDP-S34 review, let’s talk about its playability. The 88 black matte and glossy white keys have GHS technology. Yamaha YDP-S34 has weighted keys, which means the weight decreases moving from bass to treble. Although GHS is a basic technology, the Yamaha YDP-S34 is much ahead of most entry-level digital pianos.

The noise from keystrokes is softer, and the users can adjust the touch sensitivity based on their requirements. It’s dual censored and difficult to play repeated notes swiftly. Even if you try to play fast, it’s even more difficult to control and find balance.

However, if you’d like to express distinct emotions, the Yamaha YDP-S34 might not be your choice. Since it’s GHS technology, it has a weak dynamic range. However, this doesn’t mean it’s bad.

In your first glimpse, the Yamaha YDP-S34 seems to have fewer control buttons. However, after examining all the controls, you conclude these are the only significant buttons you need to create trending music.

Most experts use a combination of buttons at a time to produce the best sounds and tunes. However, you can also use the Smart Pianist App on iOS to tweak or customize your favorite songs. 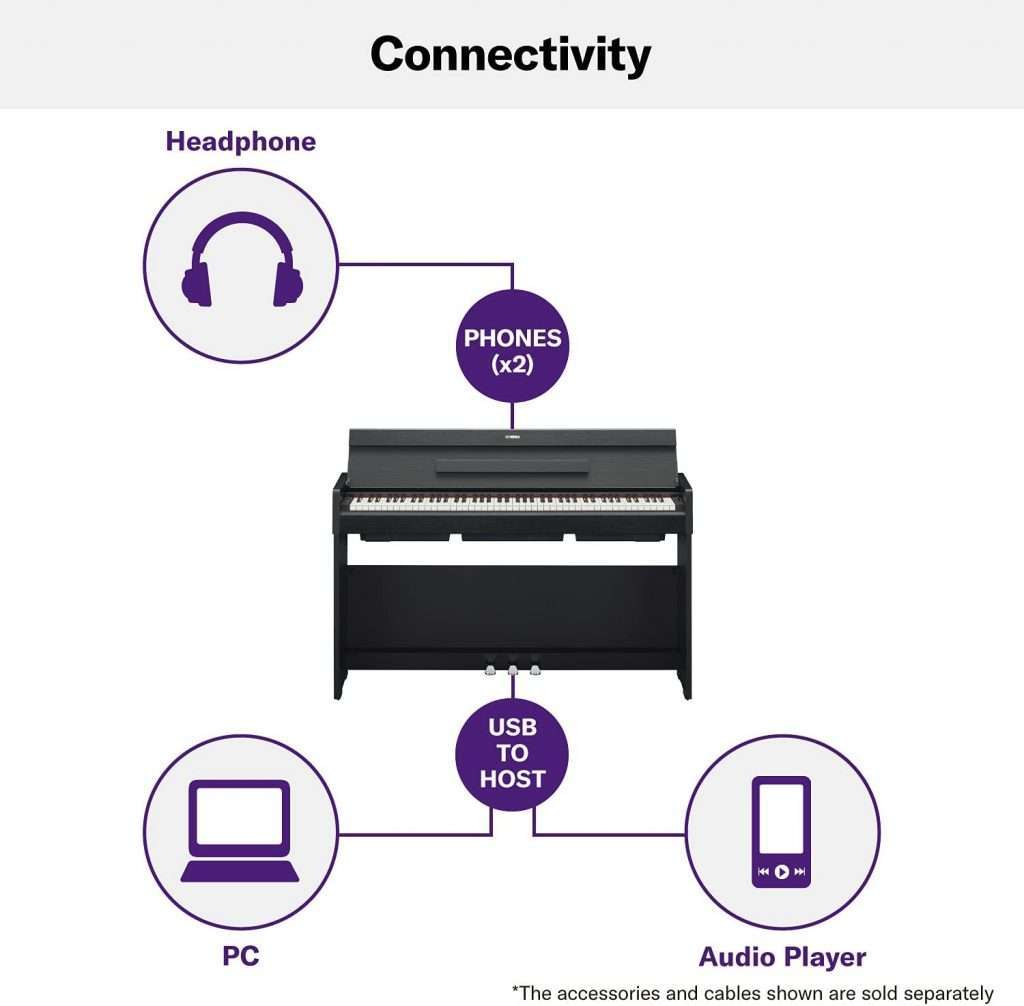 Yamaha YDP-S34 stands out from the rest when it comes to connectivity. The multiple connection features contribute to its versatility and help pianists work with various systems in one go.

But you can use multiple functions in the piano comfortably using its Smart Pianist. Yamaha offers an exclusive Smart Pianist App that helps users with high-end customizations. This app is compatible with Windows, Mac, iOS, and smartphones.

Sadly, the smartphone doesn’t give complete access to the piano’s functions. However, this isn’t the case with tablets, iPad, and PCs.

As discussed earlier, Yamaha YDP-S34 is a console-style digital piano and has 3 pedals. These pedals are damper/sustain on the left side, sostenuto in the middle, and soft-pedal on the right side. These pedals produce the same sounds like that as acoustic pianos.

But the less spacious pedals are clumsy to play with. These are even noisier than the Yamaha YDP 144. Usually, Yamaha YDP-S34 comes with a Yamaha branded bench. Like any other digital piano, it comes with headphones. However, it isn’t height adjustable. So, it’s a bit inconvenient.

At the end of the Yamaha YDP-S34 review article, let’s talk about its final verdict. Yamaha YDP-S34 is a cool piano for beginners with GHS technology. The sleek design makes it perfect for any home style. Once you upgrade your skills, you can choose another piano with excellent key action like GH or GH3.

The Yamaha YDP-S34 digital piano has CFX grand piano sounds with 9 other popular sounds. However, you need external speakers to use the Yamaha YDP-S34’s CFX sound engine to the fullest. And you get it in less than $1500. While to experience the same sounds, you should pay almost $179,999.

Of course, you get the best sound quality, but it’s too much to afford for beginner pianists. And it can be seen that the Yamaha YDP-S34 piano is worth it.

You can find more information on digital pianos and reviews, please bookmark our website and visit often. We can’t wait to see you again! 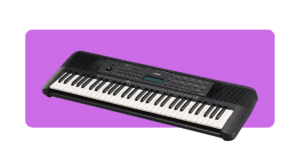 Yamaha PSR-EW310 Review [After 2 Months of Daily Use]

If you’re looking for Yamaha PSR-EW310 review, then you’re at the right article. In this 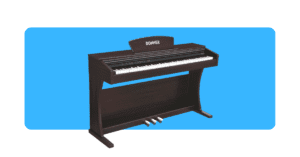 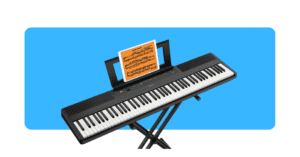 The Piano Junky is a compilation of the best digital pianos and accessories. We are a group of pianists who love to play the piano, so we wanted to inform and guide both beginners and advanced pianists. 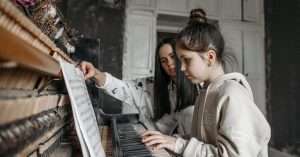 How to learn piano by yourself (In-Depth Guide) 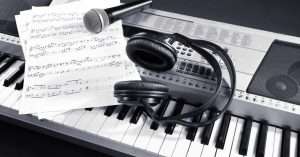 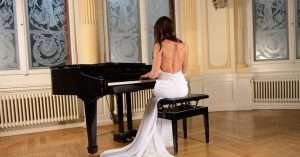 Yamaha PSR-EW310 Review [After 2 Months of Daily Use]